Marc Pais, President and CEO of Arizona Metals Corp. stated, “Detailed modelling of our recent helicopter VTEM survey has identified four conductive bodies, all starting at relatively shallow depths, and located less than 1.5km from the Kay Mine historical estimate reported by Exxon Minerals in 1982. We believe that these conductors provide excellent drill targets for additional VMS bodies located in previously untested areas.”

The conductive bodies (MX1, MX2, MX4, and MX5) are located within a 1.5km radius of the past-producing Kay Mine, which is associated with the conductor labelled MX3 (Figure 1). Of primary interest for future drill testing are MX2 (the “Central Conductor”) and MX1 (the “Western Conductor”). These two anomalies are prioritized for drilling as they have the greatest conductivity-thickness ranges, which are also consistent with semi-massive to massive sulphide bodies. 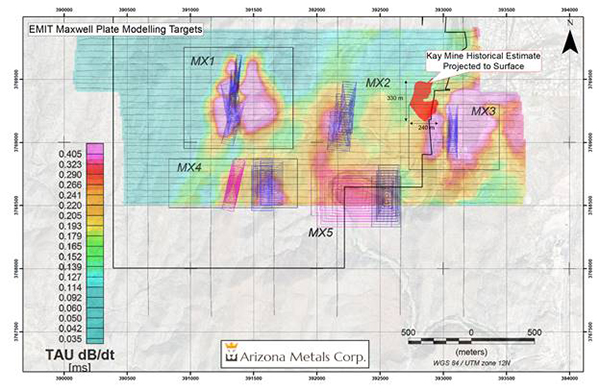 The Central Conductor is estimated to have dimensions of 400m long by 38m thick with a depth of at least 300m. The top depth of this conductor varies from 120m to 136m. This is a steeply dipping conductor that appears to follow a geological contact.

The Western Conductor is estimated to have dimensions of 300m long by 71m thick with a depth of at least 300m. The top depth of this conductor varies from 6m to 54m.

Arizona Metals Corp plans to initiate permitting of a test program consisting of three drill holes in the Central Conductor and six drill holes in the Western Conductor. The proposed hole angles and depths are displayed in Figure 2 below. Permitting of drill pads for the new conductors is targeted for Q4 2019, with drilling to commence during Q1 2020. 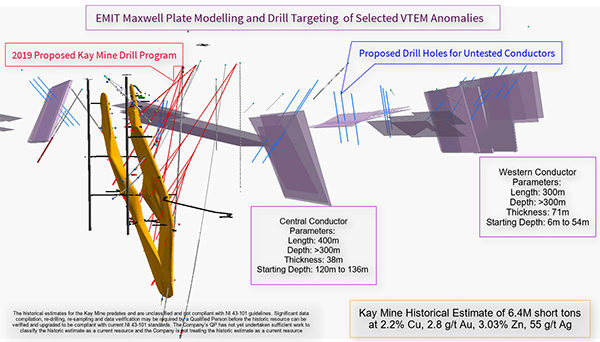 The updated 3D model of the VTEM results, including the Maxwell Plate conductors, can be viewed here:

Arizona Metals Corp owns 100% of the Kay Mine Property in Yavapai County, which is located on a combination of patented and BLM claims totaling 1,300 acres that are not subject to any royalties. An historic estimate by Exxon Minerals in 1982 reported a “proven and probable reserve of 6.4 million short tons at a grade of 2.2% copper, 2.8g/t gold, 3.03% zinc, and 55g/t silver”. The mineral reserve categories per the Exxon historical estimate are not consistent with current CIM definitions for proven and probable mineral reserves.  The Kay Mine is a steeply dipping VMS deposit that has been defined from a depth of 150m to at least 900m. It is open for expansion on strike and at depth.

The Company also owns 100% of the Sugarloaf Peak Property, in La Paz County, which is located on 4,400 acres of BLM claims. Sugarloaf is a heap-leach, open-pit target and has a historic estimate of “100 million tons containing 1.5 million ounces gold” at a grade of 0.5g/t (Dausinger, 1983, Westworld Resources). The historic estimates at the Kay Mine and the Sugarloaf Peak Property have not been verified as current mineral resources. None of the key assumptions, parameters, and methods used to prepare these historical estimates were reported, and no resource categories were used. A Qualified Person has not done sufficient work to classify them as current mineral resources, and Arizona Metals is not treating the historic estimates as current mineral resources. The Qualified Person who reviewed and approved the technical disclosure in this release is David Smith, P.Geo.